Mrs Olisa, a single mother of 3, couldn’t hide her joy and excitement when she saw her 1-year-old daughter, Ada smile at her for the first time in a long time. Ada is the last of 3 kids who was born a few weeks after her father was buried after a long battle with Colon Cancer.

“Friends and relatives supported me to ensure that I could pay for ante-natal care and Ada’s delivery, then I resorted to traditional medicine for the post-natal care however but ensured that Ada was vaccinated at a public primary healthcare center (PHC), which is 2 streets from where we live.”

Weeks ago, she encountered Dr. Ayo popularly known as Noisy Naija Pediatrician (@thenoisynaijapaediatrician) on Instagram where he made an IG post recommending that his followers subscribe to the CarePay healthcare discount service. She recounts “He mentioned that the service would help mothers and fathers cut down on their household healthcare spend as CarePay had negotiated discounts up to 40% with several private hospitals across Nigeria. I didn’t have a lot of money on me but since he mentioned that the family subscription was N4,800 for a year, I was motivated to subscribe as soon as I collected my contributions at the end of June and I got SMS messages from CarePay confirming my subscription once I paid.” Little did she know that it would turn out to be a lifesaver sooner rather than later.

According to her, Ada suddenly developed a fever and her eyes turned yellow that day. She initially rushed her to the public primary healthcare center (PHC) but they told her that Ada likely had severe malaria which they could not cater to at their health centre. She was encouraged to take her to LUTH or a private hospital in their neighborhood by the nurses. The next thing she knows, Ada started to convulse and foam at the mouth. At this point, she said, “I almost lost my mind!” 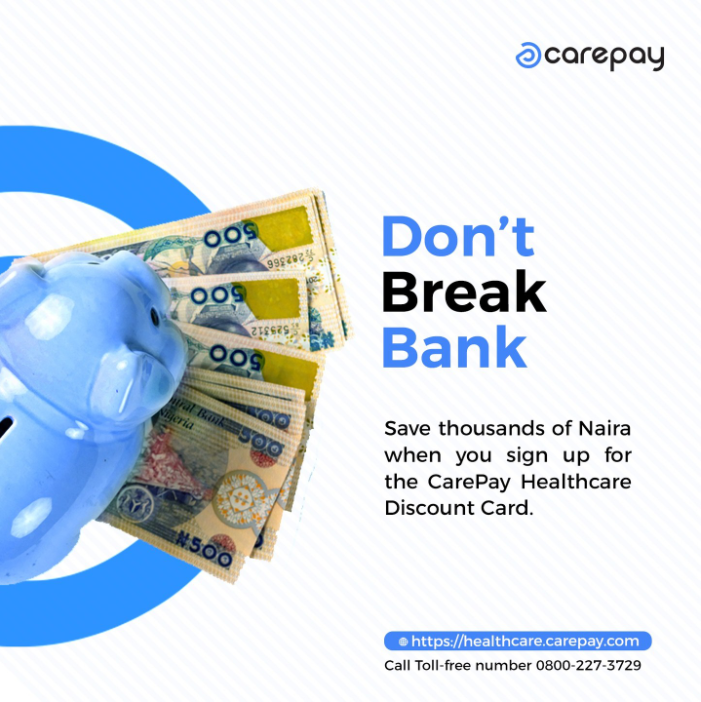 As a mother who feels the pain of her young daughter, she didn’t wait for the referral note to be completed before rushing out of the health center. She was fortunate to see her neighbor driving his tricycle popularly known as “keke” to the bus stop to pick up passengers. She says with a small laugh “Baba Ramo’s keke became our ambulance which took Ada and I to Vigor hospital, a private hospital about 2 bus stops away from the health centre.”

As soon as they arrived, Ada was taken to the emergency section while Mrs. Olisa was directed to the records section to pay for a card for Ada. In the record section, She saw a notice which indicated that the CarePay discount card was accepted there. After seeking confirmation with the records officer who confirmed that if she was a CarePay subscriber, She did not need to pay the full bill as subscribers are eligible for up to 20% discount on their bill. She stated that for the first time on that day she managed to smile and thank God for Dr. Ayo under her breath.

Young Ada was admitted for 3 nights, with doctors administering blood with various laboratory tests and
drugs. Even though their bill amounted to N100,000, thanks to the CarePay healthcare discount card, only
N80,000 was paid. Mrs. Olisa with s smile then says “The N20,000 I saved on her bill was like a God-sent gift to me. I thank Dr. Ayo, may he live long and continue to make noise on IG.” She advised mothers and even fathers to take advantage of the CarePay healthcare discount card service as you can save massively on your bill.

Subscriptions can be done via their website
https://healthcare.carepay.com or call 0800-227-3729 for assistance or further clarification.

CarePay healthcare discount card covers over 300 private healthcare facilities including pharmacies like
MedPlus and HealthPlus to save on drugs, dental clinics to save on dental care, and at optical facilities to
save on frames and lenses.