You need to read this if you have a 5 year old child or younger! Nursemaid elbow is a common injury in children caused by sudden pull at their arms. Here is how to avoid it.

Many children enjoy being carried by their arms and swung around. They scream and laugh and beg you to do it again and again. But did you know? This fun game can cause a very painful injury in children? It’s called Nursemaid’s Elbow or Pulled Elbow. 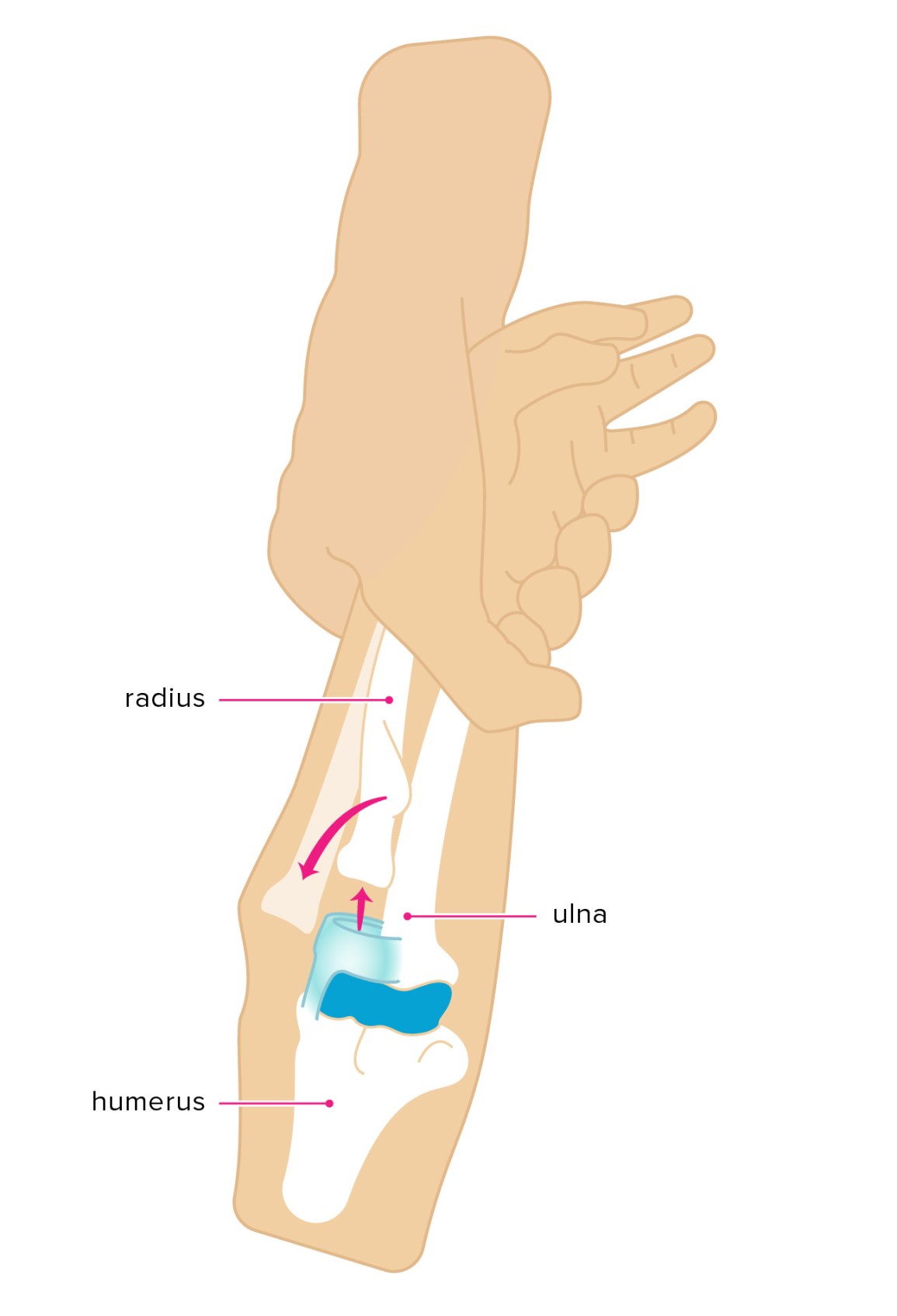 A common injury among toddlers and preschoolers is nursemaid’s elbow. It occurs when a ligament slips and becomes caught up between two bones in the elbow joint. It can be very painful even though it’s an easy fix for medical practitioners.

Elastic bands called ligaments connect the elbow bone (radius) to the elbow joint (humerus). As a child grows older, these ligaments become stronger and tighter. The ligaments are still loose in small children and babies. Making it easy for the elbow to slip out of place.

During play, bath time, diaper change or when they are lifted by the arm, two bones in the elbow can briefly separate. This can cause a ligament to slip into the joint and become stuck. The ligament become stronger as children grow older. This is why Nursemaid’s elbow is more common in children younger than the age of 5. 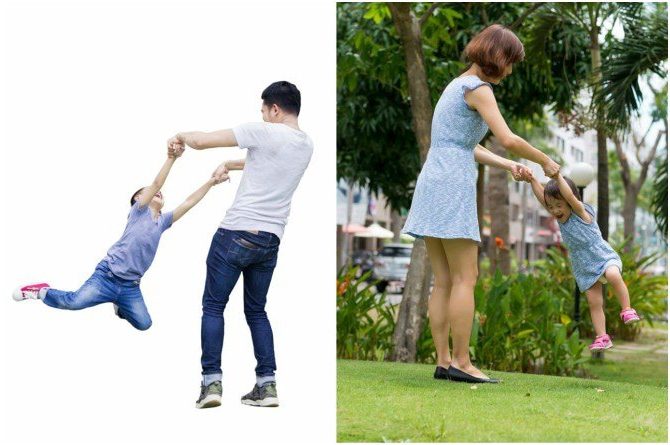 The injury may not be visible because nursemaid’s elbow does not make the elbow to appear swollen or bruised. There is usually no redness or swelling on the arm. The child may complain of pain in his or her wrist, elbow, or forearm, but he or she cannot point to a specific area of severe pain. A child suffering from nursemaid’s elbow will avoid using the injured arm because moving it is very painful. They will either keep their arm straight or with a slight bend in the elbow. It hurts in the wrist, forearm, and elbow.

It can be difficult for a parent to tell whether an elbow injury is nursemaid’s elbow or a fracture, so if your child has an injured elbow, call the doctor. While it is an easy fix for doctors, do not attempt to fix it yourself at home to avoid further injury to the arm. 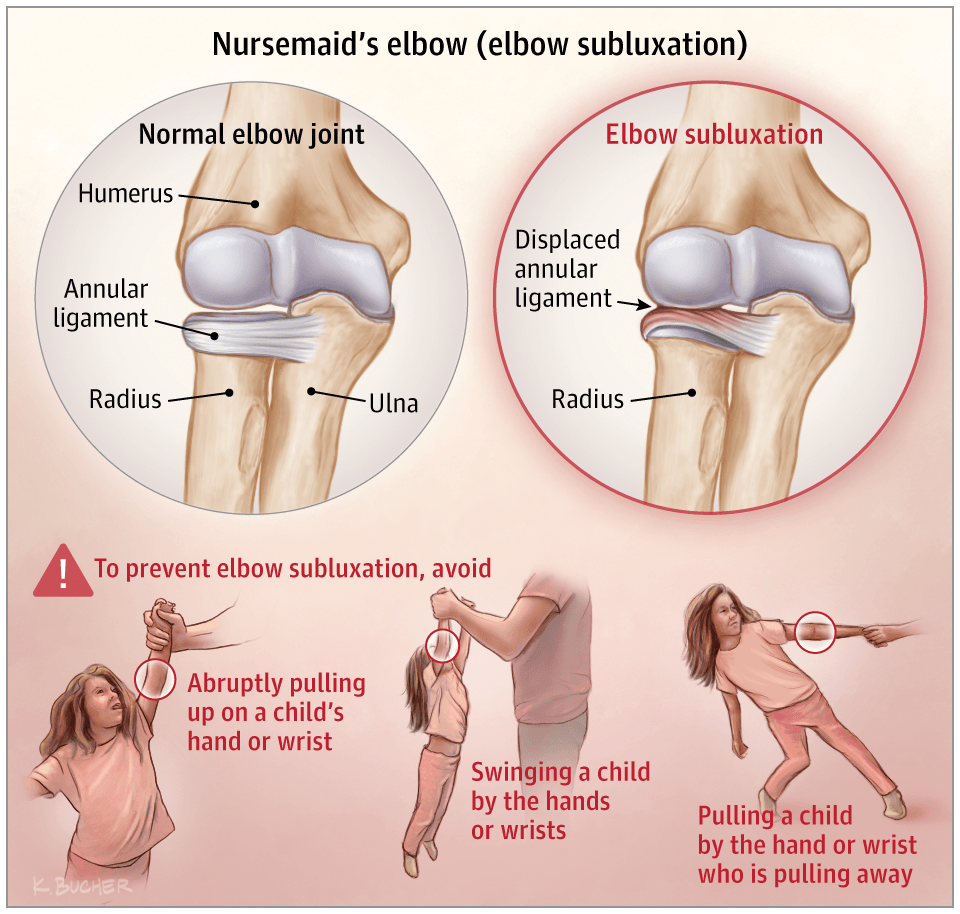 How Is Nursemaid’s Elbow Diagnosed?

Health care professionals would usually check the arm and ask how the injury was sustained. They usually don’t need to do any special tests. An elbow x-ray may be required to tell how badly injured the arm is.

Sometimes the ligament will unstick on its own. However, in most cases, a health care professional will perform a gentle arm movement known as a reduction to remove the ligament from between the two bones. The child sits on a parent’s lap while the doctor moves the arm for a few seconds. You may hear a “pop” as the joint returns to its original position. The transition may be uncomfortable at first, but children quickly feel much better. Most people regain full use of their arm within 5-15 minutes. Some people may require more than one reduction to successfully treat their injury.

A child may refuse to use their arm after a reduction if they are concerned that it will be painful. If the patient is in pain, the doctor may place the arm in a sling and prescribe acetaminophen or ibuprofen. In some cases, the doctor may apply a splint (a partial cast) or a sling to the arm until it can be examined by a specialist after a few days of rest. Any other issues can be investigated by the specialist.

Quick Tip: Give your child a toy or a drink to encourage him or her to use the arm. Watch closely to see if she can move the arm freely.

Children can get nursemaid’s elbow multiple times. Parents and caregivers should never pull, tug, or swing a child by the arms or hands to help prevent it. Pick up your child from beneath the armpits, not by the hands or arms.

Sometimes the first attempt at reduction fails. It may take two or more attempts to return the elbow to its proper position but surgery is almost never required. If your doctor is unable to reposition the elbow bone, he or she will refer you to an orthopedic specialist.

Child abuse can sometimes cause nursemaid’s elbow. If there are other signs that the child is being abused or if it occurs in an older child, a child abuse investigation may be conducted.

Here is the proper way to lift up a child

If you suspect your child has nursemaid’s elbow, it is critical that he or she be treated as soon as possible to avoid swelling, which makes treatment more difficult and painful.